Summary of past findings:

During my masters I studied social learning and independent exploration in Sumatran orangutans (Pongo abelii) and how infants and juveniles learn their diets. I measured number of processing steps of different food items and found that when a mother was foraging on more complex food items, the more attentive infants were in watching their mums while eating. Also rarer items received more attention than when the mother was feeding on items that are more frequent in the diet. 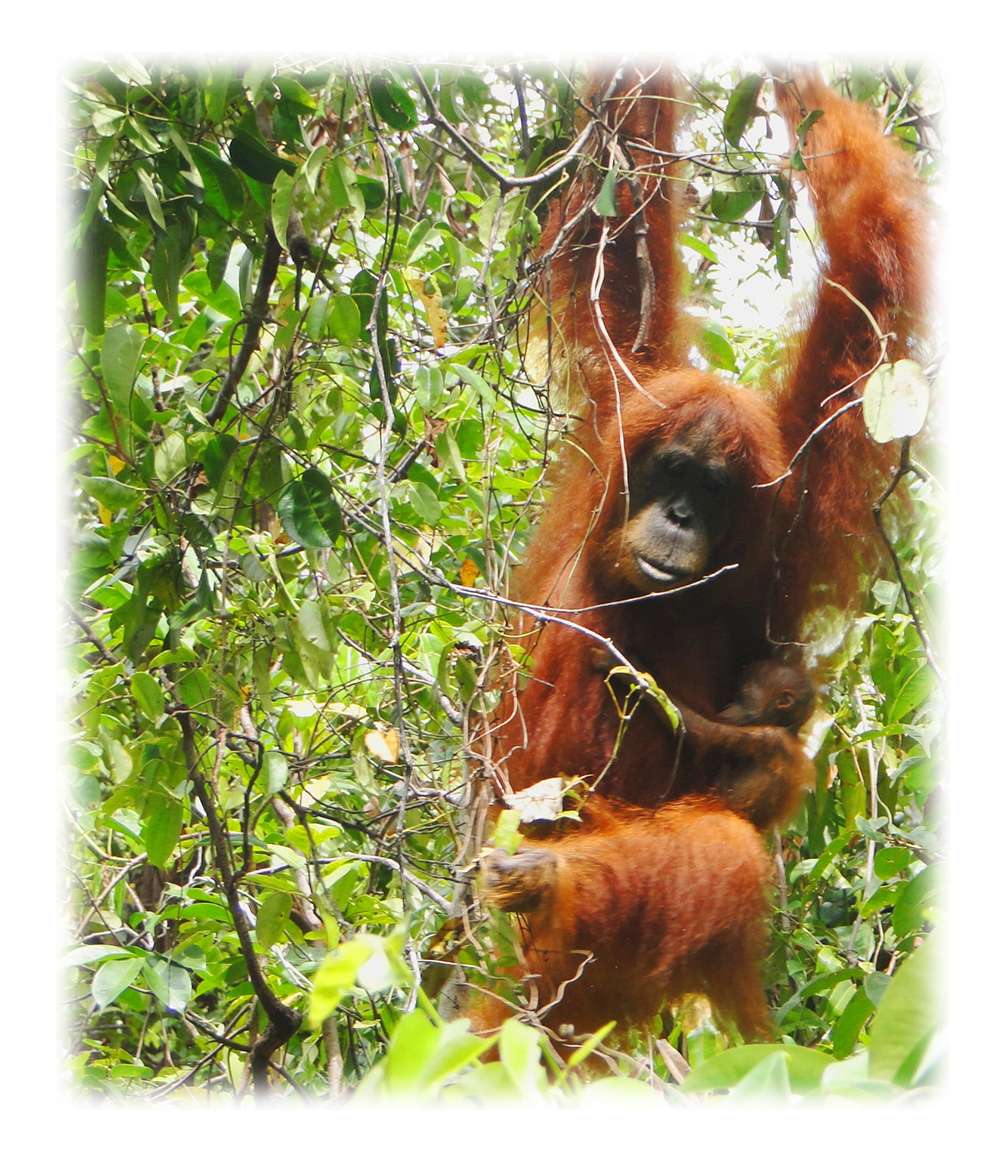 Although humans have evolved specialized adaptations making us a culture-dependent species, during my PhD I probed the idea that processes underlying cultural learning are more widely distributed and impact cognitive abilities also in nonhuman primates. I conducted multiple projects to test the presence of culturally constructed intelligence in orangutans.

I) Wild and captive orangutans respond differently to new things

I have studied reactions to novel things in both wild and captive orangutans. My findings suggest that despite the common belief, orangutans are ironically not naturally curious toward novelty and in fact avoid it. By systematically measuring reactions to same novelty in captivity I demonstrated a Captivity Effect and that in contrast to cautious wild individuals, captive orangutans showed a more curious response to new objects (Forss et al. 2015). Thus, even though innovations are the building blocks of what we define as orangutan culture, individuals do not boldly explore novel things and rarely invent under natural conditions. Consequently, the individual pathway, assuming innovations to appear from intrinsic curiosity expressed through novelty response seems not to be the case for orangutans. Instead, my work support the notion that innovations arise because the acquisition of skills through social learning can occasionally result in modifications of existing innovations 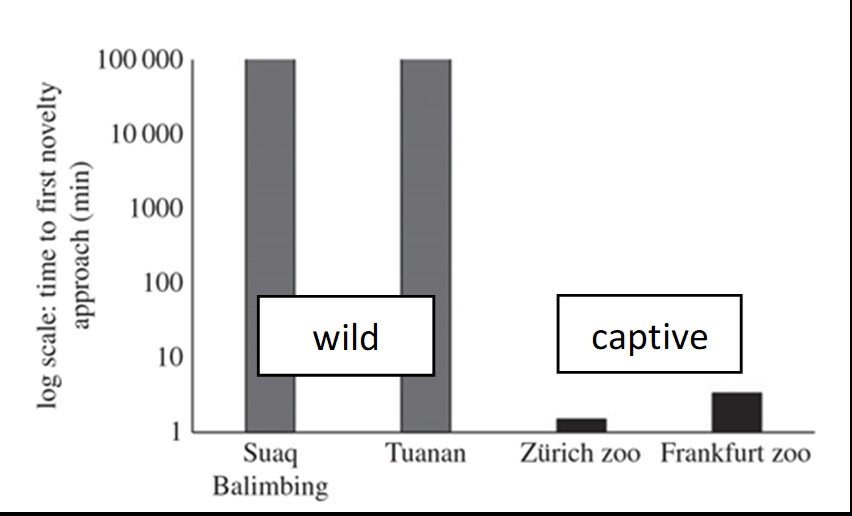 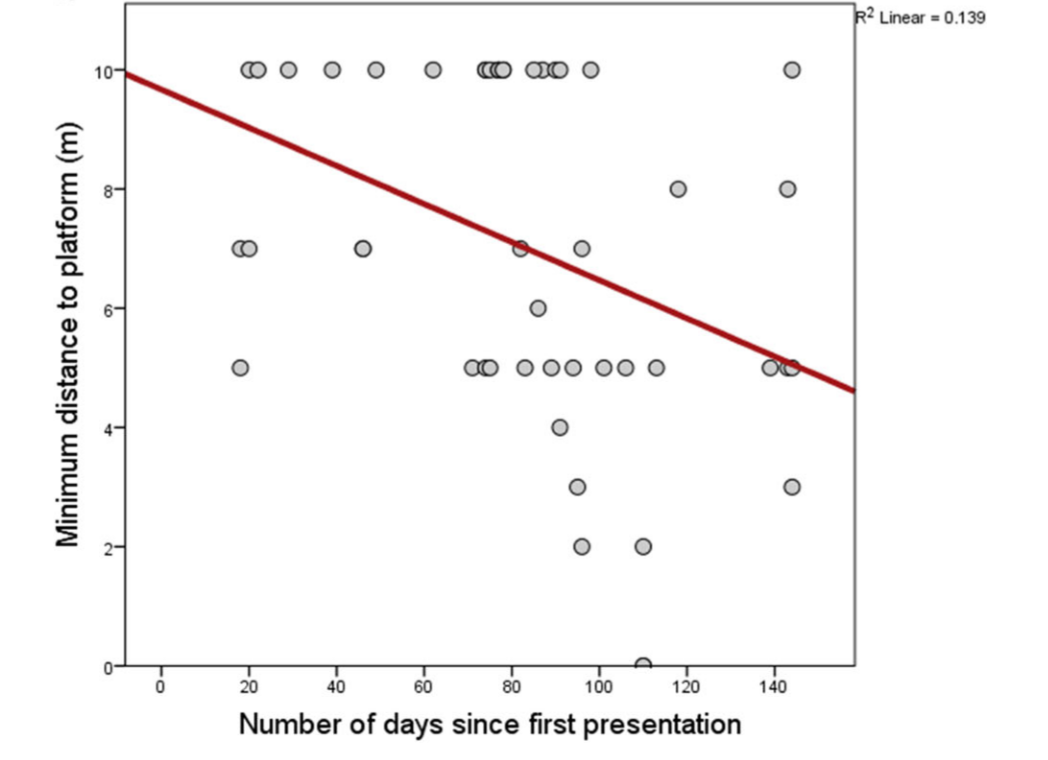 In a theoretical review of the literature (Forss, Koski & van Schaik 2017), we found that social (cultural) species prefer attending to social information if available, when confronted with novelty. In slow paced life-history species, that depend on social learning in acquistion of their species-specific diet, using information provided by experts or role models may be the preferable strategy when encountering novelty. This implies that innovations are retained as a consequence of effective social learning ability. In long-lived species characterized by an extended developmental phase – like the orangutans – socially protected learning represents an adaptation through which risks can be avoided. On the contrary, the very same species, which have evolved to effectively learn skills from conspecifics can be made to express the opposite behavior – novelty-based curiosity – once the constraints of risk are removed. One such case is when animals are kept in artificial and risk-free habitats, like the enriched conditions of captivity provided by modern zoos. Captive animals experience different environments from those of conspecifics in natural habitats, which can affect their cognition – a process that can give rise to the captivity effect, the phenomenon that captive animals show greatly different psychological attitudes and cognitive abilities compared with their wild counterparts.

II) The outcome of Human orientation in captive apes

The findings from my PhD also show that the effects of a life in captivity is more than loss of neophobia – especially in great apes – who are adapted to learn from others and therefore also can attend to humans as additional role models. Accordingly their intensified social environment boosts attentiveness, causing further cognitive changes. In a joint study with my collegue Dr. Laura Damerius, we showed that among orangutans, the life experience with humans changes their attitudes toward novelty, which in turn resulted in better physical cognitive skills. We measured the way apes behave towards humans and this Human Orientation Index predicted their successs in a novel problem-solving task (Damerius & Forss et al. 2016). Beyond improved actual performance, individuals with higher human orientation were also more curious and creative: they explored the task longer and used more variable exploratory actions while doing so. Thus when considering primate cognition, the introduced HOI-measurement describes a continuous process, of which the end point is enculturation. Hence, among captive apes cognitive skills may never be culture-free due to the effects of individuals´ specific experiences. 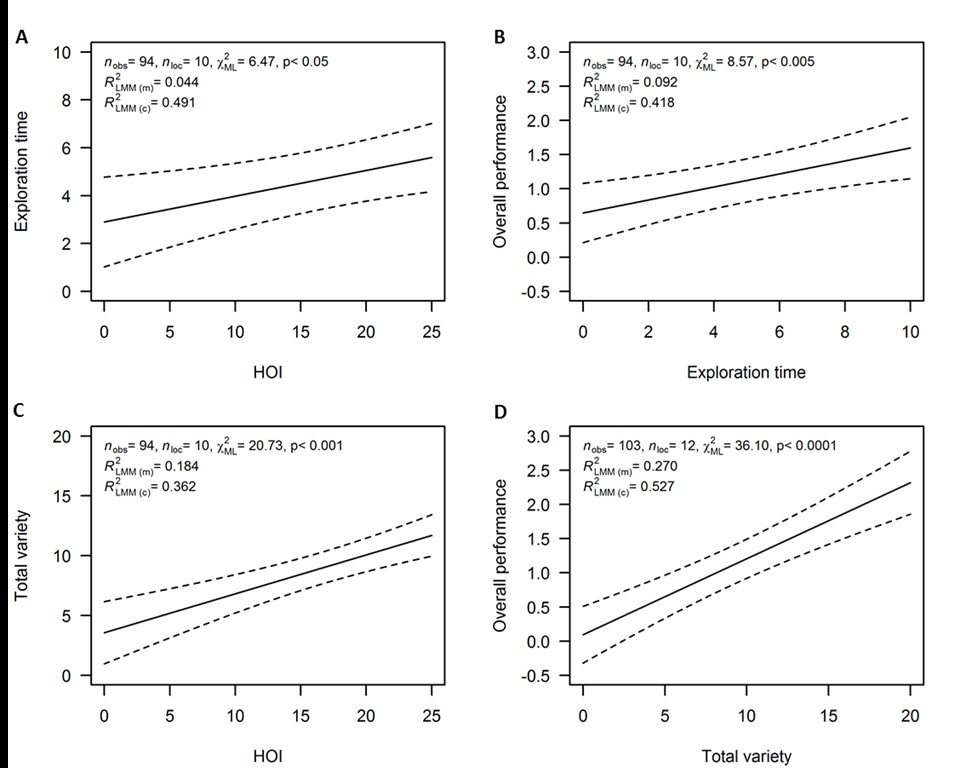 Picture description – A: These graphs show how Human Orientation Index (HOI) predict the duration of orangutans exploration of the novel rpoblem-solving apparatus and C) the variety of exploration actions they used. B) Both the exploration duration and D) exploration variety in turn predicted success in the problem-solving task. 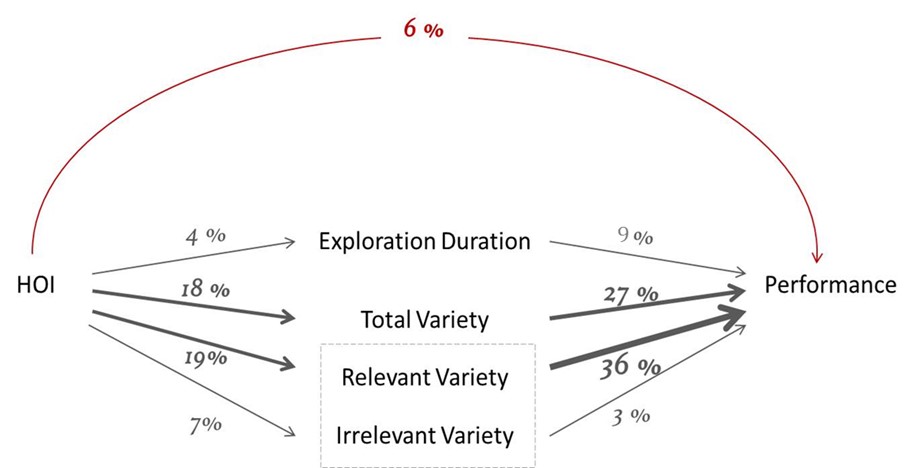 My research has also delivered the first empirical test of the Cultural Intelligence Hypothesis in a non-human taxon. In their natural habitats, Sumatran and Bornean orang-utans differ systematically in the frequency of the opportunities for social learning. Sumatran populations show higher densities and are consistently more gregarious and socially tolerant. They also show much greater repertoires of learned skills and exploratory behaviour, along with greater cultural repertoires in general. This difference in socio-ecology has likely persisted over evolutionary time. Thus, under homogeneous environmental conditions provided by zoos, I probed the idea that over an evolutionary time scale the socio-ecological destictions have produced cognitive differences between the two Pongo species. To control for experience effects, I compared a sample containing only standard mother-reared individuals, with similar human orientation values, living in highly similar zoo environments. Here intrinsic differences in cognitive performance appeared: Sumatran orangutans outperformed the Borneans (Forss et al. 2016). My findings show that not only do they differ in physical problem-solving performance, but also in underlying mechanisms such as inhibitory control and caution, traits that may very well be under selection when selection is on the efficiency of social skill transmission, and thus crucial for cultural learning to take place. 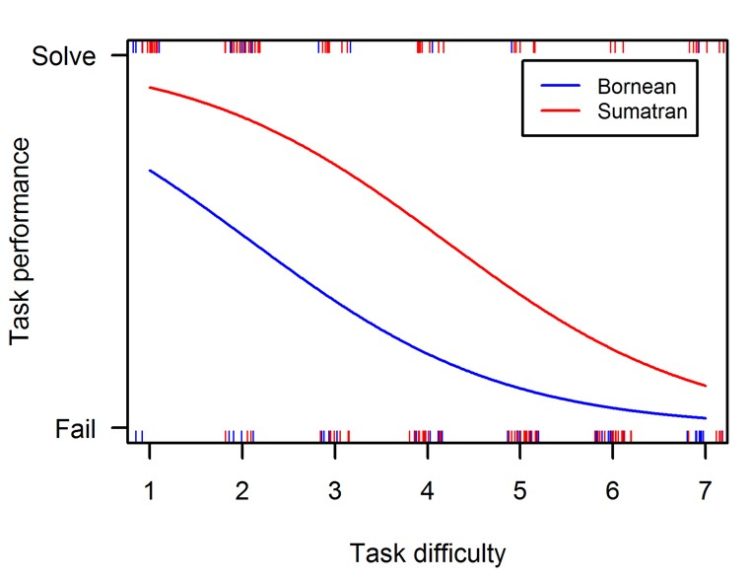 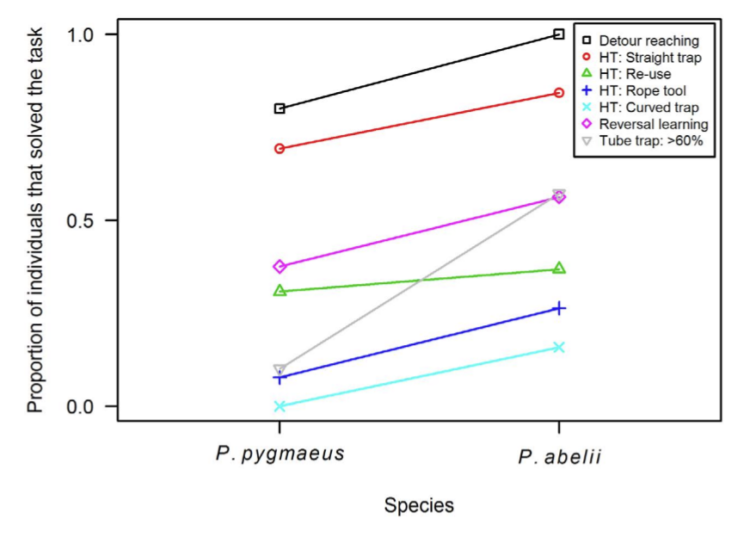 Picture descriptions – Left: The differences in task success between Bornean and Sumatran Orangutans in relation to task difficulty. Right: Proportion of orangutans that solved the different problem-solving tasks compared between the two orangutan species.

I continued the line of research started during my PhD but expanded the study system to other great apes: bonobos and chimpanzees. I then applied same tests on curiosity and problem-solving and could confirm some interesting species differences.

Pongo and Pan differ in their responses to new food items

I measured food reactions and exploration behavior in over 130 ape subjects in four great ape species: Pongo abelii, Pongo pygmaeus, Pan troglodytes and Pan paniscus and found that species differ considerably in their responses. The solitary orangutan species show less neophobic reactions than the more social Pan species. Chimpanzees were most explorative of novel foods and would be more likely to taste novel food when tested in their social groups. In the publication, we discuss these results in the light of the social information hypothesis (Forss et al. 2018). The social information hypothesis states that species showing the paradoxical combination of strong neophobia and strong exploration tendency can rely on social information to select aspects of the environment worth exploring. 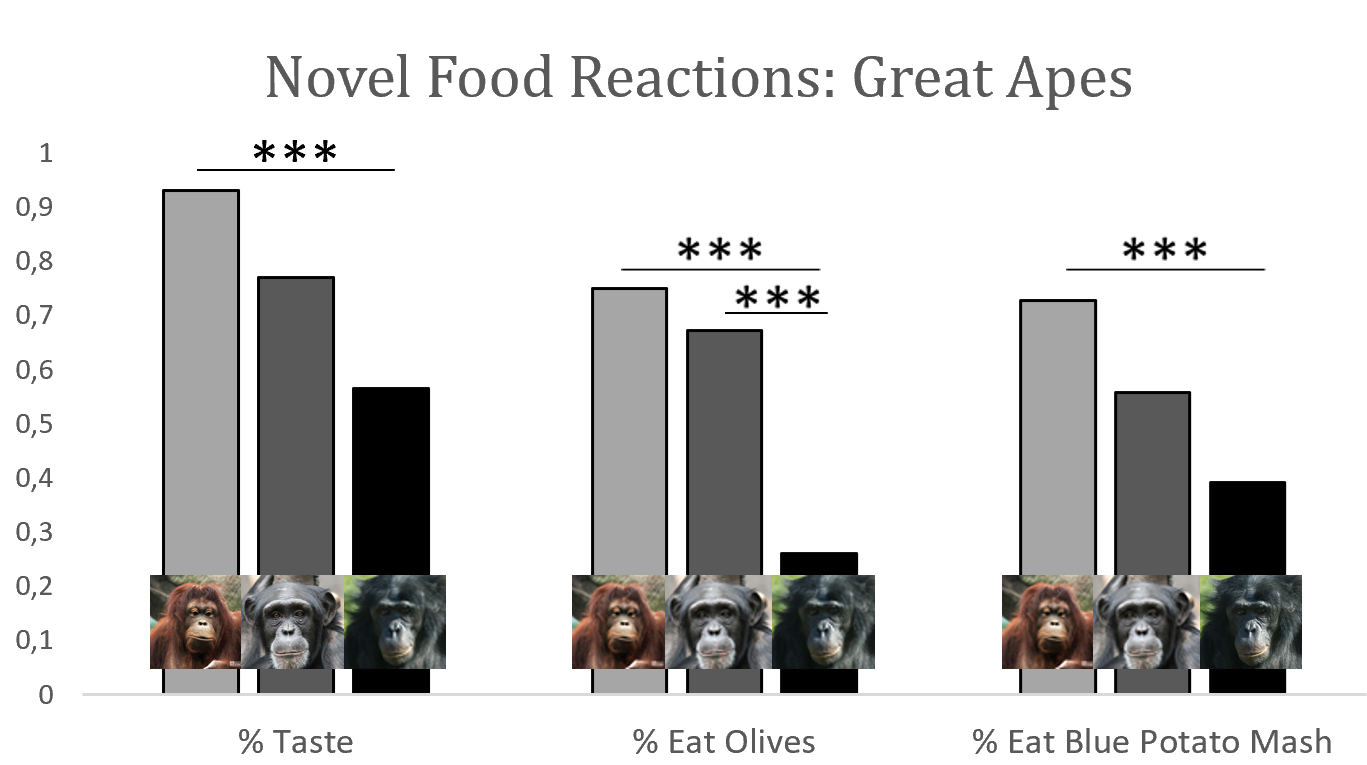 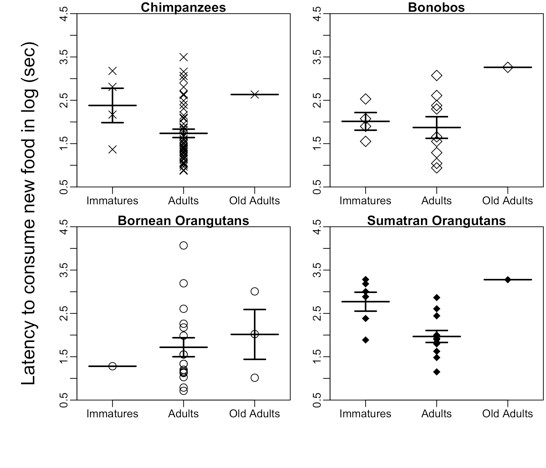 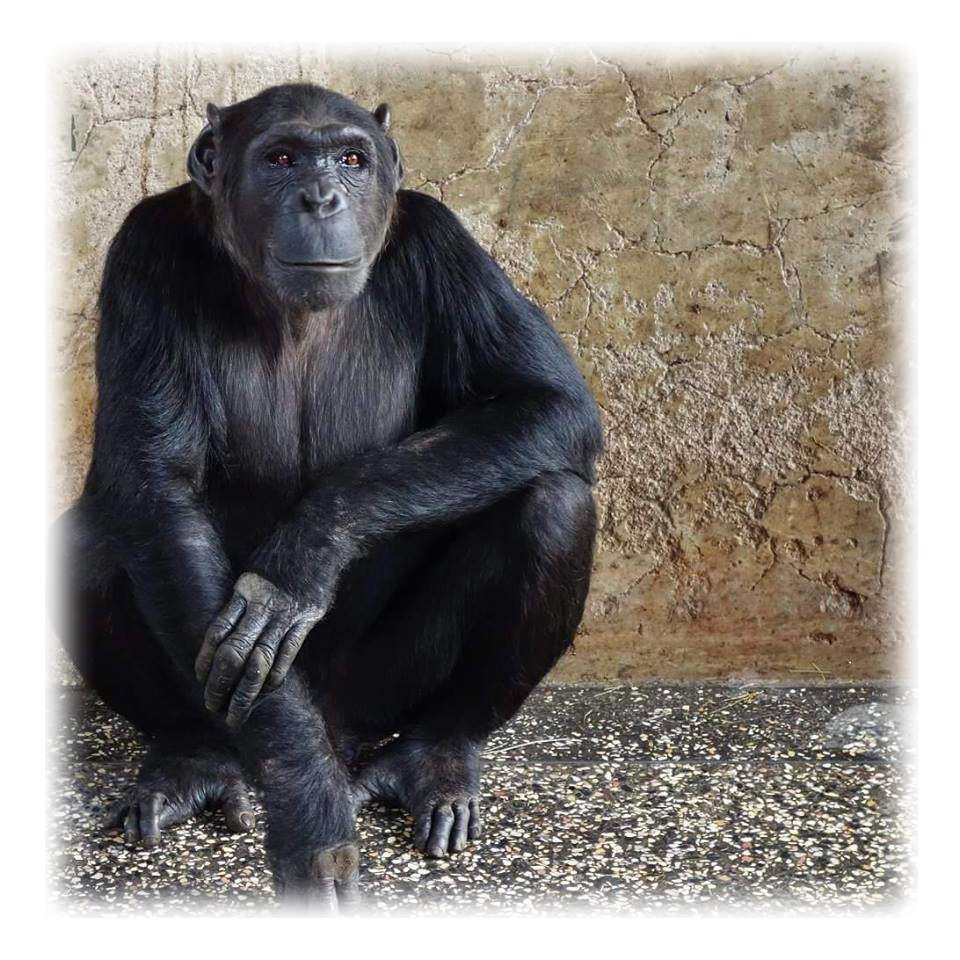 During my Postdoc fellowship at university of Tübingen I investigate how early rearing conditions affect physical cognition in over 60 chimpanzees through different physical problem-solving tasks: The detour reaching task, the visible honey trap task, a tube trap task and a reversal learning task. These tasks all measure different aspects of physical cognition. I collected this data on chimpanzees that varied greatly in the early social environmental conditions prior to two years of age. My results show that these first years of life have an influence on how well the chimpanzees performed in the cognitive tests (Forss et al. In revisions). Considering the vast literature and debate on how early environment influence human infants’ cognitive development, our results on chimpanzees add some important knowledge for the field of developmental psychology and  comparative cognition. Results coming public soon… 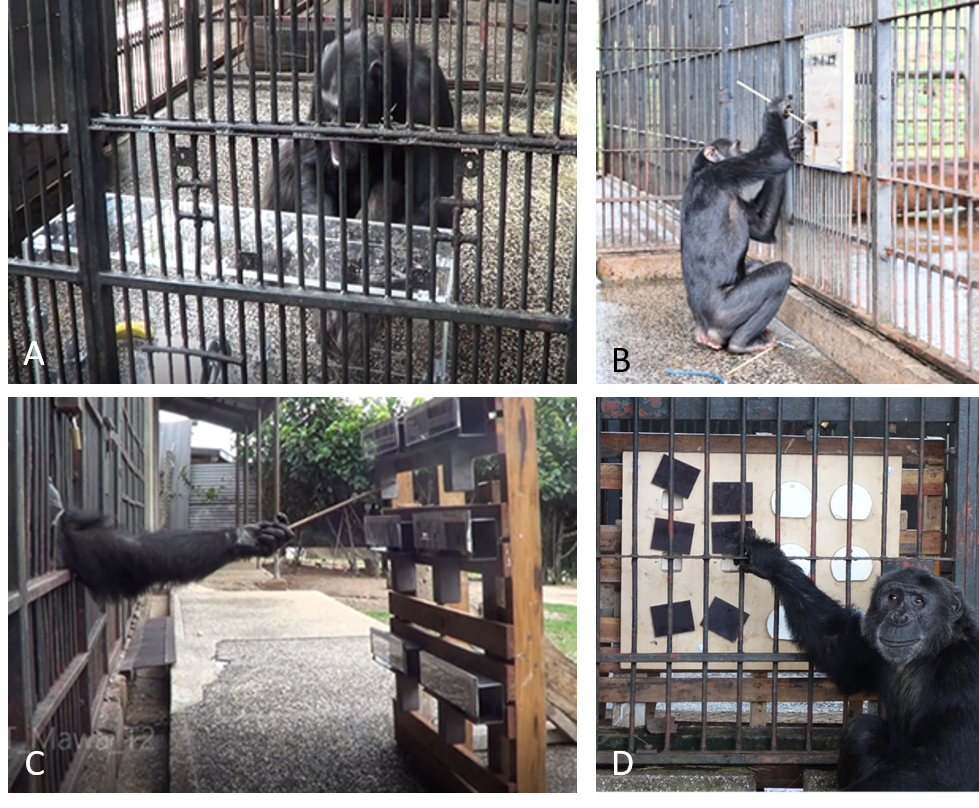 I prefer to work with both wild and captive populations of the same species to adress both ecological vadility and the evolutionary adaptation of cognitive traits in natural habitats,  but also to be able to perform controllable cognition experiments in captivity. To assess reactions to novelty in wild populations, I use motion-triggered-video camera traps to avoid human influences, as habituation to humans has been confirmed to influence neophobia (Damerius & Forss et al. 2017). 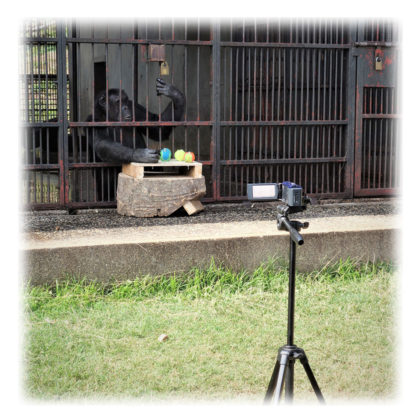 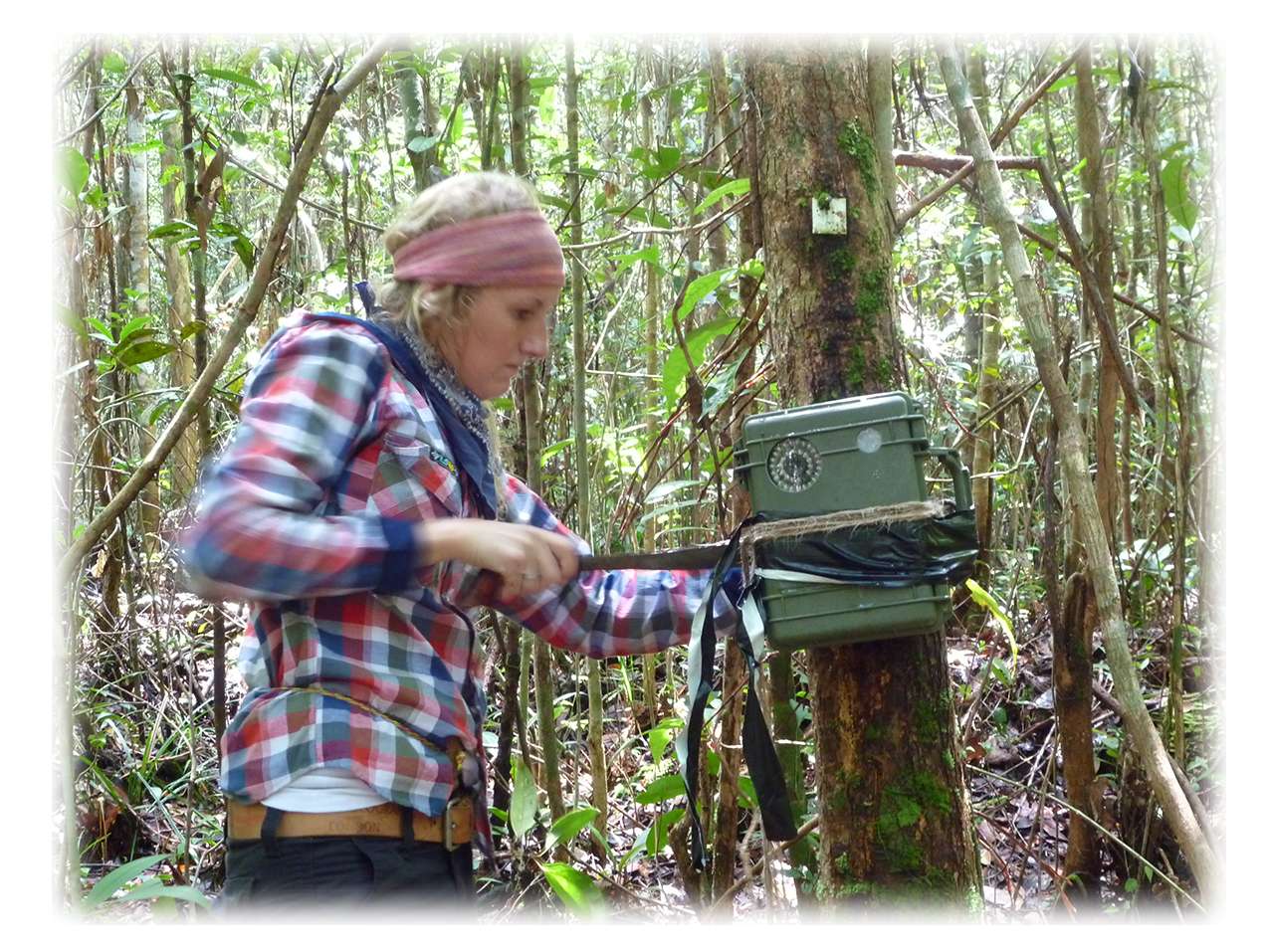 A great variety of zoological gardens:

Foundations in my homeland Finland: